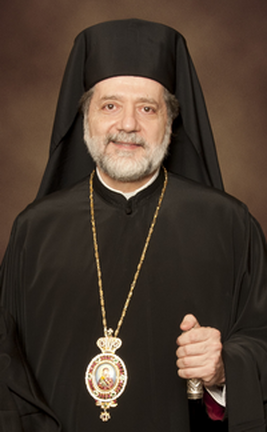 In 1975, Metropolitan Nicholas enrolled as a graduate student at the Holy Cross Greek Orthodox School of Theology in Brookline, Massachusetts. In 1978 he earned a Masters of Divinity degree and was the valedictorian of his class. He continued academic work through post-graduate studies at the University of Athens following his graduation from Holy Cross.

Metropolitan Nicholas worked in public health for ten years in Denver, where he was active in the life of the Assumption Greek Orthodox Cathedral. In 1983, he joined the Greek Orthodox Diocese of Denver, working as an assistant to Bishop Philip of Daphnous, who was serving as locum tenens of the Diocese. Later, he served Bishop Anthimos of Denver as an assistant. In 1990, he formally began his service in the Diocese of Pittsburgh as Administrative Assistant to Bishop Maximos.

Metropolitan Nicholas was ordained as a Deacon on July 6th, 1991 by Bishop Maximos at the Annunciation Church in McKeesport, Pennsylvania. He was ordained to the Priesthood by Bishop Maximos and co-celebrant Bishop Philip at the Assumption Greek Orthodox Cathedral in Denver, Colorado on July 13th, 1991. He was elevated to the rank of Archimandrite on the same day, based on his years of service to the Church.

He served as Chancellor of the Diocese of Pittsburgh from 1991 to 1995 and was Chancellor of the Diocese of Detroit from 1996 to 1997. Archbishop Spyridon then assigned him to the parish of Holy Cross in Brooklyn, New York in August 1997. In Brooklyn, Metropolitan Nicholas initiated innovative programs in the parish such as Fair Share Stewardship and the Inquiry Class for parishioners and engaged couples. He also started a Brownies Girl Scout Troop, started the Children's Liturgical Choir of the Dimitrios and Georgia Kaloidis Parochial School, and helped rebuild the parochial school's library.

Metropolitan Nicholas was elected as the Bishop of the Greek Orthodox Diocese of Detroit by the Holy and Sacred Synod of Constantinople on Saturday, March 13, 1999 (view election document). He was consecrated as Bishop on the Saturday of Lazarus, April 3, 1999, at the Holy Cross Greek Orthodox Church in Brooklyn, New York by Archbishop Spyridon, who was assisted by Metropolitan Maximos of Pittsburgh and Bishop Dimitri of the Antiochian Orthodox Archdiocese. His Enthronement took place on Sunday, April 18, 1999 at the Annunciation Cathedral in Detroit, MI.